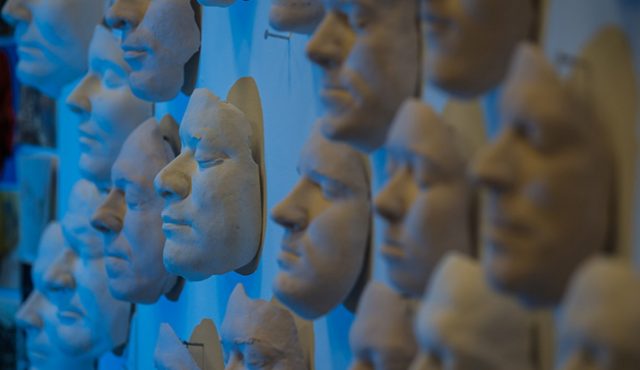 A Slippery Rock University art major has created an exhibit that she hopes will cast a new light on local law enforcement.

Kaci Flora literally cast the faces of 50 police officers with plaster for an art exhibit titled “Faces of Courage.”

“Every time I turn on the news, there’s discussion about corruption, officer-involved shootings and the men and women of law enforcement are being questioned for a decision that they had to make in five seconds,” Flora said in an interview with Butler Radio. “And it hurts me. These people put their lives on the line for us everyday…and they’re not respected anymore.”

Five of the faces in Flora’s exhibit are her own family members. She has several uncles and cousins who are officers. Eleven officers from the Pennsylvania State Police Troop D in Butler volunteered their time to get their faces captured. Officers had to lie still on a table for about 35 minutes while a putty-like substance used for dental impressions was poured over them. Flora placed straws in their nostrils for breathing.

After the plaster casting dried overnight, Flora used a rotary drill to chip away excess bubbles and drips.

“It gave me 100 percent replication,” Flora said. “I can see every single pore, every single hair follicle. Some of the officers lying there had a little bit of perspiration and it ended up looking like tears in their eyes. I wanted to feature these faces. Not anonymous people, but real people.”

The exhibit will be open next week, May 7-10, at Slippery Rock University. It is free to attend and open to the public.