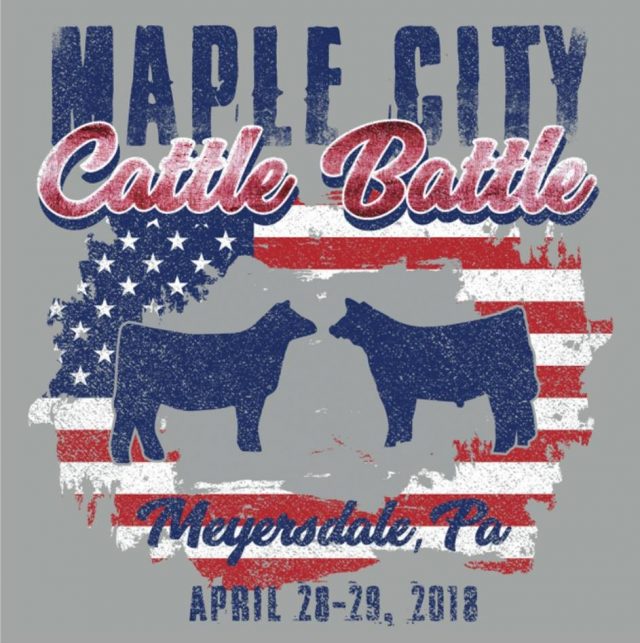 The Maple City Cattle Battle, formerly called the Jackpot Show, hosted 56 heifers on Saturday and 79 steers and 11 market heifers on Sunday at the Somerset County Fairgrounds in Meyersdale.

“This was the first year we turned this show into a two-day event,” said Greta Durst, who co-chairs the event with Annette Knotts. “In doing so, we had 55 more entries and there were exhibitors from Pennsylvania, New York, Maryland, Virginia and Ohio.”

Both Knotts and Durst are board members of the Somerset County Beef Producers, the organization that holds the event annually along with many sponsors. Knotts has been helping with this event for decades.

In the market animal part of the steer show, Burkheimer won reserve, while Emily Faulkoner of Culpepper came in third; Lily Berghorn in fourth; and Mariah Jewell in fifth.

For Somerset County exhibitors, Renee Svonavec, 18, of Rockwood won Champion County Exhibitor Overall Steer, while Braden Durst, 10, of Berlin won reserve. Svonavec is the daughter of Vince and Donna Svonavec. Durst is the son of Mike and Greta Durst of Berlin. Jeb Friedline of Somerset came in third, followed by Allison Schmuck of Rockwood in fourth and Riley Hay of Berlin in fifth.

Show judge for the day was Taylor Langford of Blacksburg, Virginia. He is a graduate student at Virginia Tech currently working on his doctorate in beef cattle nutrition and management.

Langford also obtained an associate degree from Northeastern Oklahoma A&M, where he served as a livestock judge and was named to an All-American Judging Team. He received a bachelor’s and master’s degree at Oklahoma State University, where he was a member of the judging team there as well.

Langford said during the show that the quality of animals was very high and the exhibitors handled their animals well in the show ring.

For Champion County Exhibitor in the heifer show, Beth Miller of Meyersdale came in first, followed by Allison Schmuck of Rockwood in second and Hartley VanGilder of Berlin in third and fourth. Beth Miller also won champion for the Club Calf Sale exhibitors.