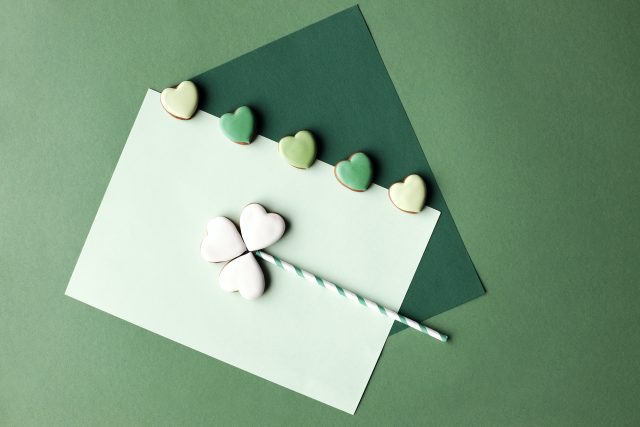 Get ready for green lights, green hats, even green beer! St. Patrick’s Day is on March 17th. Why is Ireland’s national day such a worldwide party?

In the 1971 film The Flight of the Doves, an Irish policeman lifts up a little English girl so that she can see the nearby parade for Saint Patrick’s Day. He tells her, “It’s a great day for the Irish.” The little girl exclaims, ‘I’m not Irish!’, to which the policeman replies, “You don’t have to be Irish to be Irish!” St. Patrick’s Day is the national day of Ireland. Every March 17th, the day is celebrated around the globe by millions of people, Irish and not-so-Irish.

Did you know that St. Patrick himself was not actually Irish? It is thought that he was either Scottish or Welsh, coming from a wealthy Christian family. Ancient documents suggest that, as a teenager, he was taken by Irish pirates to work as a slave in Ireland. Once in his new country, he began to talk to Irish people about God, introducing his Christian beliefs to the country.

Patrick and the snakes

Old legends say that, years ago, Ireland had a lot of snakes and that St. Patrick used his powers to chase them all into the sea. To this day, Ireland has many old statues of St. Patrick, often with snakes at his feet. Apparently, this is why Ireland has no native species of snakes (though most scientists suggest that this fact could be more related to geographical reasons).

March 17th is a day for huge celebrations in Ireland. However, due to Ireland’s history of emigration, many people around the world consider themselves to be partly Irish because of their ancestral connections. This means that St. Patrick’s Day parties take place around the world, from Boston to Tokyo, Sydney to Buenos Aires. In fact, Saint Patrick’s Day is celebrated in more countries than any other national festival.

The most famous celebrations on St. Patrick’s Day are the parades. These are carnival-like events, where people dress up and walk along the street, dancing or playing music. Often the parades include big lorries, specially decorated in green. Many of the world’s major cities have enormous parades. The largest is in New York, where 150,000 people participate in the parade and millions of people watch. The second largest is in Dublin, Ireland’s capital city.

Ireland itself is a relatively small country with few cities. However, most of its towns and villages have their own “mini” parades. Sometimes, these simply include a few tractors and the children from the local school. The shortest known parade used to take place in the village of Dripsey, in southern Ireland. The length of the parade was just 23 metres, between the village’s two pubs. However, the Dripsey parade came to an end when one of the two pubs sadly closed down!

A day for green

Another well-known aspect of St. Patrick’s Day is the colour green. Around the world, many people wear green clothes as a way of marking the day. In major cities, green lights illuminate famous global landmarks such as the Colosseum in Rome or the Christ The Redeemer statue in Rio de Janeiro. In Chicago, thousands of people watch as special boats dye the river a bright green colour. Students at Miami University in Ohio, USA, even have a 70-year-old tradition of drinking special green St. Patrick’s beer!

Wherever you are from, make sure you celebrate this March 17th by watching your local parade, drinking some Irish beer or perhaps just by wearing a silly green hat. And do not forget to wish your friends a wonderful St. Patrick’s Day, or, as they say in Ireland, “Happy Paddy’s Day!”