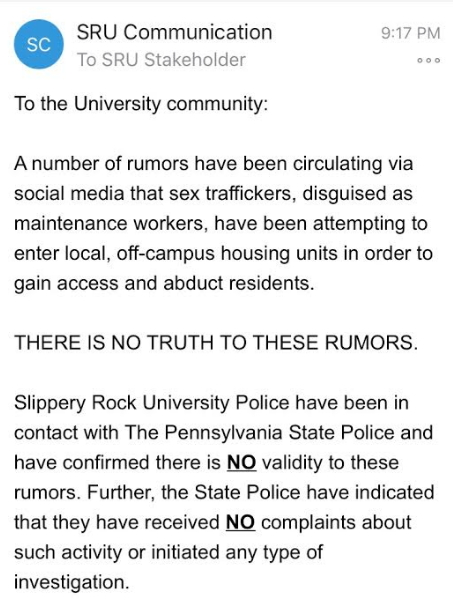 Slippery Rock University is debunking rumors that sex traffickers have been attempting to enter off-campus apartments.

In an e-mail to students and university staff Wednesday night, the school said several rumors have been circulating on social media that sex traffickers, disguised as maintenance workers, have been attempting to enter local, off-campus housing units in order to gain access and abduct residents.

The school said the rumors are completely untrue and unsubstantiated. The e-mail went on to say that SRU Police have been in contact with the Pennsylvania State Police and have confirmed there is no validity to these rumors. The school says State Police have not received any complaints about such activity or initiated any type of investigation.

“The University did issue an e-mail last night regarding the unsubstantiated rumors appearing on social media regarding that alleged activity in order to clear up misconceptions,” Robb W. King, Associate Executive Director for Communication and Public Affairs at Slippery Rock University, said in an e-mail Thursday morning.

The rumors appeared to allege the activity was happening at the Pine Glenn and University Village apartment complexes.