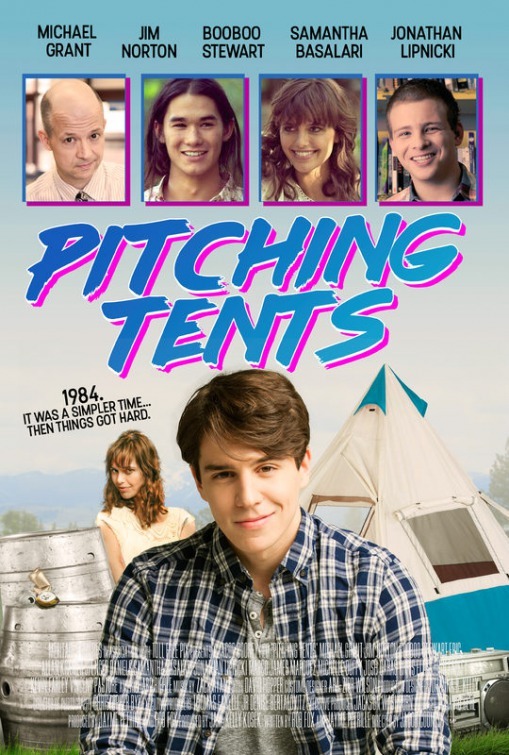 One genre I miss is the teen sex comedy. Who am I kidding, I do not really miss it, but there have been some good ones in the past. Remember movies about teenage boys stalking women, drilling holes in girl’s locker rooms, and all obsessed about getting laid, all the while learning a little something about themselves? Saying it out loud makes it all sound a little distasteful “in these times.” So how do you make a teen sex comedy today? Writers Rob A. Fox, Jayme Petrille, and director Jacob Cooney found the secret. Set it in the 1980s or in the case of their film Pitching Tents, the year is 1984.

Danny (Michael Grant) is a graduating senior getting ready to work at the “plant” his father, Bruce (Eric Allan Kramer), works. Oh, but Danny thinks he wants more out of life, seeing that he’s a gifted artist as evidenced by a cartoon cow he drew on the local market window as part of the “Where’s the Beef?” campaign.

Meanwhile, high school guidance counselor Mr. Mulligan (Jim Norton) is about to lose his job because he has not gotten enough students to enroll at Slippery Rock College. A desperate Mr. Mulligan convinces a student enrolled at Slippery Rock and convinces her to join the Peace Corps instead. He also finds Danny, the last student without post-graduation plans, and offers him an opportunity to interview with Slippery Rock the following week.

“Danny clashes with his parents, when he expresses interest in college versus working the rest of his life doing hard labor…”

Anyways, it’s the weekend. A special weekend called “Trout Camp,” where all the kids in town go to the lake and party, drink, smoke weed, each shrooms, and make futile attempts to have sex. Just before going on the trip, Danny clashes with his parents, when he expresses interest in college versus working the rest of his life doing hard labor. Upset, Danny sneaks out and goes to trout camp with his buddies Todd (Booboo Stewart), Scott (Jonathan Lipnicki), Phil (Marco James Marquez), and pot supplier Stash (Spencer Daniels).

As the party at Trout Camp heats up, the cops make an appearance to shut things down. Fortunately, the gang gets away to safety, but Danny is separated from the group. He wakes up in the “Goddess Camp,” a campsite of urban legend lore where only the most beautiful women can skinny dip in seclusion. There Danny meets Alison (Samantha Basalari), who sneaks a peak at Danny’s sketchbook and urges him to go to college. That makes Danny happy. Then as Alison is escorting Danny away from Goddess Camp, they trip and fall on top of each other, and off come the clothes.

I suppose all the teen comedy elements are there: parents whose priorities are all screwed up, teachers whose survival at work is misinterpreted was wanting the best for their students, boys and girls unsupervised in the middle of nowhere, and the cool kids belittling the not-so-cool kids because they are still virgins.

“…tame, especially as a teen sex comedy. A few boobs and language pushes it into R-territory…”

The best word I can use to describe Pitching Tents is tame, especially as a teen sex comedy. A few boobs and language pushes it into R-territory, but nothing close to raunchy like Porky’s or American Pie. As far as Danny’s story of choosing between college or the plant, again tame. Also the Trout Camp antics…tame. The film’s themes are not original and needed to be pushed more into the R-rating or pull it back to a PG-13, where it would probably do better on VOD.

As far as the film goes, the acting in Pitching Tents is good, along with its production values. This type of film seems to attract a lot work child actors and Disney Channel stars, like Eric Allan Kramer, Booboo Stewart, and even little Jonathan Lipnicki, for the much-needed IMDB credit. Let me end by highlighting Jim Norton’s performance. I know him mostly as a radio host and stand-up comic. He manages to elevate the script and role he was given and bring comedic life to his character. Unfortunately, the good does not help the story’s blandness.