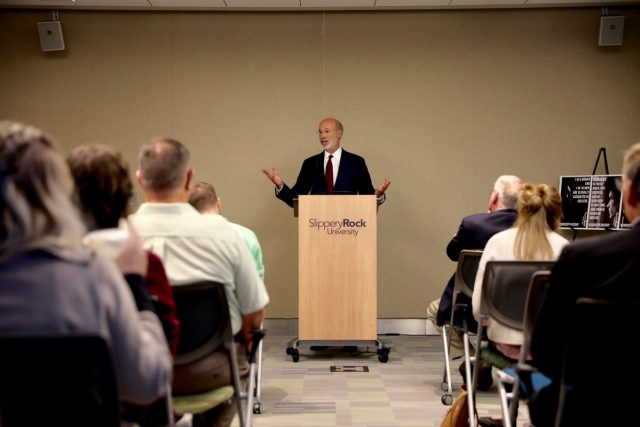 Wolf launched It’s On Us PA over three years ago as the nation’s first statewide campaign to address the crisis of sexual assault on campuses.

“I commend Slippery Rock University, and schools across the commonwealth, for working to change campus culture and make schools safer,” Wolf said. “The risk of sexual assaults increases at the start of the fall semester. The It’s On Us campaign is encouraging these conversations and is increasing awareness, education and resources to combat sexual assault.”

It’s On Us is a national movement started by the Obama administration to fight against sexual assault on college campuses for both men and women, state officials said. Over the past three years, the Wolf administration has invested nearly $3 million in competitive grants to dozens of two-year and four-year institutions in the state. The grants support programs on campuses to stop sexual violence.

In addition to grants, the governor championed two major laws that he signed in June. One law requires post-secondary institutions to offer online, anonymous options for students to report sexual assaults. The other law protects students reporting sexual assault from being disciplined for violating school drug, alcohol or other policies.

“We must never tolerate sexual assault on our campuses or a culture that allows it,” Wolf said. “We can all be proud that Pennsylvania is a national leader on this issue. This movement is fueled by students, parents and administrators demanding that all students are safe at our colleges and universities.”

During the visit, the governor met privately with student leaders and administrators to learn about Slippery Rock University’s It’s On Us initiatives to protect students.

“Slippery Rock University is committed to providing a safe, welcoming environment free from all forms of coercion and harassment for students, employees and guests,” said William Behre, president of Slippery Rock. “This commitment includes education, prevention and, if necessary, punishment for all forms of harassment. We have zero tolerance for behavior that violates our community values; values that expect people to demonstrate mutual respect and appreciation of all persons regardless of age, creed, disability, ethnic heritage, gender, gender identity, race, religion, sexual orientation, or socioeconomic status in academic and extracurricular endeavors, in the working environment, and in the daily life of the University community.”

The first several weeks of the fall semester is commonly referred to as the “Red Zone” when sexual assault increases, especially among freshman women.