Outside, underneath the blanket of gray skies, temperatures are holding tight at frigid and freezing.

A whipping wind blusters and snowflakes are still more common than the brightly shining sun.

This is supposed to be the emergence of spring, but instead, forecasts hold true like it is December.

Consequently, baseball and softball fields across Portage County are still weeks away from seeing any live action.

Inside Darrah’s All-Star Academy, though, temperatures hover comfortably around 72 degrees. There is no wind, and the athletes are playing baseball and softball in T-shirts and shorts.

Better yet, all of the familiar sounds of spring can be heard.

The pop of the ball as it hits the pocket of a mitt.

The ping of the ball as it makes square contact with a bat.

Inside Darrah’s All-Star Academy in Ravenna, baseball and softball are alive and well.

Even when the outside weather says otherwise.

It has been that way for 10 years now for Darrah’s All-Star Academy, which is celebrating its milestone anniversary in 2018. 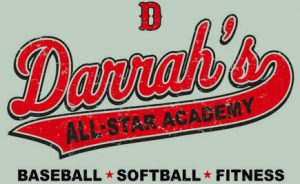 The academy’s longevity and growth is directly connected to its successful development of players across multiple age groups and abilities.

A plan put in motion by owner Luke Darrah, who said his primary objectives was to keep players involved in the game for as long as possible, using instruction to fulfill fundamental learning to maximize each players’ abilities.

“We try to keep things real simple,” Darrah said. “We are not real fancy with our approach. We have adapted over time from our knowledge and to the athlete, but we work hard to give players the basic foundation of fundamentals and then build them up from there, while always trying to keep the game fun. It has been a successful formula.”

The creation of Darrah’s All-Star Academy was the product of Darrah finally saying, “Yes.”

Darrah has been associated with softball success for decades, including a state championship in 1991 as the head coach of the Hoban Knights. Throughout the 2000s he was consistently fielding inquiries for private lessons and clinics for players.

A busy schedule, though, forced Darrah to turn down more of those inquiries than he would have liked to.

Once Darrah’s son Mike – a 2003 graduate of Rootstown High School – completed his playing career at West Liberty State University and professionally for the Slippery Rock Sliders, Utica Brewmasters and Washington Wildthings, the two began to talk about the potential of opening a baseball and softball academy.

“I have always loved the game and have always enjoyed training and working with players,” Darrah said. “Mike and I talked, and he was up for it and we went for it.”

Rootstown baseball coach and athletic director Keith Waesch was also a key voice in the beginning stages, providing good ideas and offering input on training, according to Darrah.

The end result was the birth of Darrah’s All-Star Academy.

And with it, an additional tool and opportunity for area players who are looking for an outlet for extra work, especially in the offseason.

Darrah said he has watched the game “light up” for players that are willing to commit to learning, then see it translate in games.

“When you have a student who wants to learn and who wants to get better, it is just a special feeling to watch that happen,” Darrah said. “The more fundamentals the player has, the more success they have the opportunity to have. That can make the game more fun and keep them involved in the game longer. Regardless of what a player’s maximum ability is, we focus on getting to whatever that maximum level is.”

For the academy, that path has included every type of player that may come to mind — from youth to high school, from college to minor leaguers. This year Mike Darrah is training a 70-year-old.

“We needed more space,” Darrah said. “When we first moved into our first place, we knew it was not real big, but we knew we could make it work. Once we moved into our new place, we had extra space, but we filled it up right away. Honestly, we could use a little bit more room, but this is a great space. It is insulated and is working out great for us.”

Eventually, the weather will break and it will be perfect for the game to move to its rightful place outside.

Until then, and for those looking for continued improvement in and out of season, Darrah’s All-Star Academy has proven to be a shining outlet even when the sun is not doing the same.