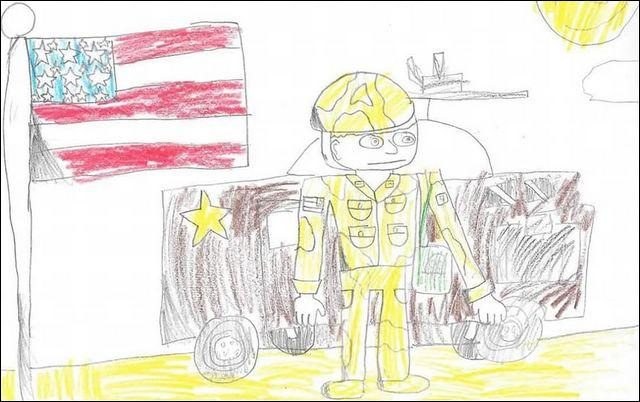 A fifth-grader from Seneca Valley’s Haine Middle School will soon be a published illustrator, when one of his drawings is included in an upcoming book written by a Slippery Rock University professor.

Josh Wolford’s art is on a page in Robert Snyder’s new book titled “Why Did Daddy Have to Leave?” which comes out June 14.

The book could be bought here.

Bob Wolford, Josh’s father, said this is a dream come true for his son, who has been drawing since he was 4 or 5 years old. It is a way Josh winds down his day after school.

“He wants to be an illustrator when he grows up,” he said.

Josh said he is thankful to Snyder and his new book.

“I am excited that my favorite hobby I do for fun gave me this opportunity,” he said.

Snyder talked about his book, which explains what a veteran is and the sacrifices they make, and his personal experiences as a veteran. Snyder served in the Army Reserves Military Police Corps for 15 years.

He shared photographs from his one-year deployment in Baghdad, Iraq, during Operation Enduring Freedom and Operation Iraqi Freedom.

At the end of the assembly, Snyder asked students to think of something they’d learned that was not in his book and draw a new page for it that would be included in his next book.

Snyder said he does not know of any other authors who have incorporated children’s artwork into their books like this.

“For me that was an exciting thing to bring a new component to it and to ultimately make one of these students a published illustrator,” he said. “It generates a lot of energy among the students to learn to write and to contribute in that way.”

On the book tour, he visited more than 40 schools along the East Coast, from Florida to New York, and asked students at each school to submit artwork for his next publication.

Snyder took his favorite 10 pieces of artwork and passed them on to the book’s illustrator and publisher, to choose what would go into the new book, “Why Did Daddy Have to Leave?”

The book helps children understand why a parent on active military duty or serving as a Reserve or National Guard soldier called to active duty must leave their family for an extended period of time.

It’s told through the voice of a young child watching their father pack up to leave for active duty. The book is based on Snyder’s own experience.

“It’s based on what my kids went through having me deployed in Iraq,” he said. His children were 6 and 8 years old when he deployed.

Josh’s illustration shows a man dressed in military fatigues standing by a military vehicle with an American flag flying in the background. It was included on a page where the family is reunited. The child has a poster saying “Welcome Home Daddy! I love you!” with Josh’s illustration.

“I think this book will be really beneficial for teachers to share … and for parents to purchase that have a spouse in the military,” he said.

Snyder’s books can be bought at amazon.com, bluemarlinpubs.com or his website robertsnyderbooks.com.