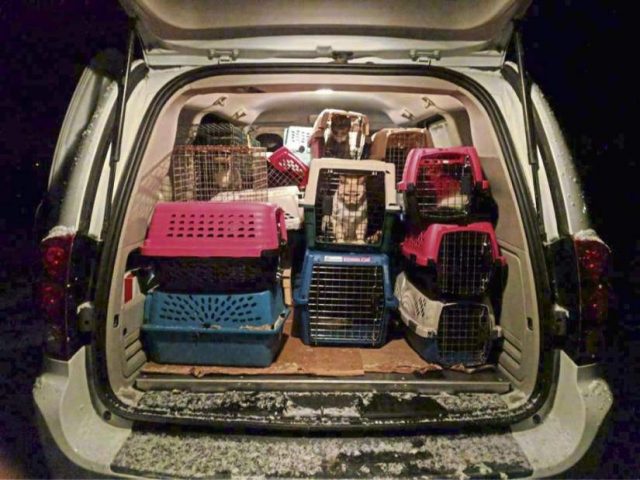 Frankie’s Friends Cat Rescue of New Kensington is caring for 42 cats and a dog that were removed this month from a Slippery Rock house.

Dr. Becky Morrow, a veterinarian and the center’s medical director, said her organization received word from the borough about a house due to be condemned that contained a large number of animals.

The organization’s humane officer, Debbie Urmann, visited the property, reported back that conditions there were dire and secured a warrant from District Judge William O’Donnell to enter the home on March 7.

The house and property were littered with waste.

“That is a big risk to their health,” she said. “It’s a form of animal cruelty.”

Morrow said once the animals were rounded up, they were placed in her organization’s mobile surgery unit for evaluation before being transported to New Kensington. 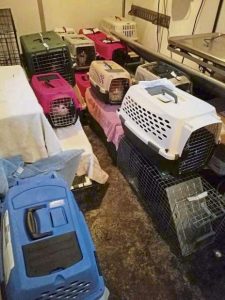 The animals’ fate is uncertain. Their owner, Carol Dickey of Slippery Rock, has not officially released the animals to Frankie’s Friends’ custody.

“Our hope is that the owner will basically sign the cats over to us so that we can get them into good health and get them to their ‘forever homes,’ rather than wait for the court system to work things out,” Morrow said.

Any court case could take months, Morrow said. In the meantime, the cats will have to remain in Frankie’s custody because the state sees them as evidence.

“Animals are considered property and they are evidence in the case,” she said. “We can give them care for health conditions, but we’re not allowed to get them into homes.”

Morrow said that these types of cases are especially unfortunate because oftentimes a people who horde animals thinks they are doing the right thing by keeping more pets than they can handle.

“It’s really unfortunate that people do think they are doing good by the animals,” Morrow said. “But considering the conditions they were living in — any reasonable person would look and say this is horrifying.”

Urmann, whose humane officer jurisdiction covers all of Butler and Westmoreland counties, said that sometimes good people do a bad thing.

“Normally, people who have their heart in the right place and are trying to help the animals, it’s hard for them to say no,” she said. “Then they find themselves in a position where they are in over their head.”