In an all too familiar scenario, PA state representative Aaron Bernstine publicly attacked student journalist Cody Nespor via Twitter. While praising two other college journalists, Bernstine accused Cody of pushing a liberal agenda and of being a horrible writer. Although his sentence structure was not great.

The editor in chief of The Rocket at Slippery Rock University responded, and things did not go too well for Mr. Bernstine from there. The initial tweet has been deleted, but the criticism has not.

Things likely started when Cody, using his personal Twitter account, criticized Bernstine. On March 29, Cody tweeted “Every so often I’m reminded how much of an embarrassment for Butler County having Aaron Bernstine as its rep is.” You might remember Bernstine as the state rep who tweeted in September “If anyone EVER tries to stop my car on a highway with negative intentions… I will not stop under any conditions.” So you might understand why Cody is not his biggest fan. 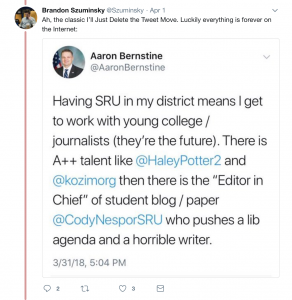 Bernstine responded on March 31, and proceeded to encourage folks to hire the other two students mentioned in his initial tweet, implying you should not hire Cody. At least one Twitter user found the thread inappropriate, asking Bernstine if he thought “it’s beneath the dignity of your office that you attach (sic) a college student who disagrees with your viewpoints.”

Shortly later, Cody shared the best way to get in touch with him and asked what liberal agenda he was pushing. The only thing he could think of was his column in response to the Parkland shooting.

Cody, who lives in the representative’s district, said the Twitter exchange was surprising.

“I thought is was funny, that he would take time out of his day to come after a 22 year old college senior on Twitter,” he said. 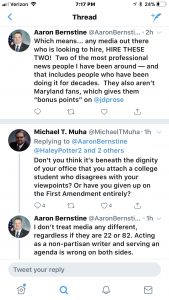 While politicians criticizing students on social media is almost a trend now, Cody thinks there was more to this exchange than just that.

“I think this was less of me being a student and more of Bernstine trying to create some sort of him vs the media fantasy,” he said. “The problem is I’m a full time student, I don’t work for any media outlet outside of school and also I posted my opinion on my own Twitter. I honestly think he just wanted to be Trump Jr. or something and thought I would be an easy target he could construe as ‘the media’.”

Cody also said he thinks politicians are trying to silence students through these kinds of exchanges.

“As for politicians attacking young people, I believe they think that they can intimidate or bully us [to get us] to stop opposing them,” he said. “I think Bernstine’s attack had clear intentions of trying to ruin my professional pursuits, and he thought that would scare me into shutting up.”

Cody did not shut up, but instead responded, which he said was easy.

“He doesn’t know the first thing about me,” he said. “So I knew if I called him out he wouldn’t have a response, or at least one that made sense. Which, ultimately he didn’t.”

Bernstine has removed the Tweet (though there are screenshots everywhere), and Cody said he feels a little vindicated.

“I don’t feel like I did anything wrong in the first place; I’m one of his constituents just voicing my opinion,” he said. “But I do think he embarrassed himself quite a bit with the first tweet, so I’d be lying if I said I don’t enjoy the fact that he had to delete it.”

The thing that did bother Cody is that Bernstine attempted to pit him against two of his peers, Haley Potter and Morgan Koziar.

“[A]t Slippery Rock the whole student body really is like one big community, even more so in student media,” he said. “All three student media organizations, the newspaper, TV station and radio station (The Rocket, WSRU-TV and WSRU-FM respectively) get along really well. We all support each other and work together and more often than not we’ll cross over and work for multiple organizations. For Bernstine to use Haley and Morgan in an attack on me just really shows how little he understands what SRU is actually like.”

He says other students should stand their ground regardless of who is criticizing them.

“I think the first bit of advice I ever got when I started working at the student newspaper was that ‘if you’re doing your job right then someone will always be mad,’” he said. “I would just add on to that and say that when you make someone mad, you can’t let them bully or intimidate you into submission no matter who they are.”