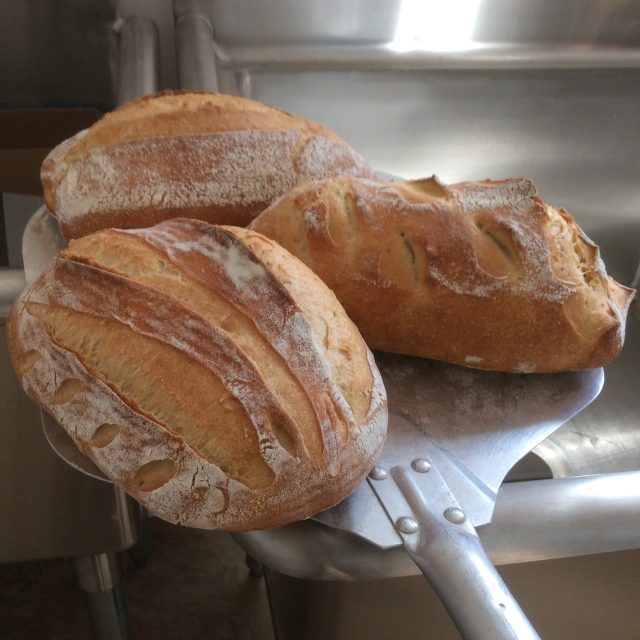 To ease the minds of her six students, Sands assured them that they, too, could make artisan bread.

“You don’t need a fancy, expensive oven; a ceramic cloche or special clay baker; a bucket of no-knead dough; an auto-temperature proofing box or a grain mill,” she said.

“What you do need is time, correct temperatures, patience and observation, and gentle hand skills.”

Throughout the class, students had the opportunity to get their hands in the dough and to experience the process.

This eclectic group came from within about a 70-mile radius of Sands’ farm. Two were owners of bed and breakfasts inns. Some were foodies, and others just wanted to learn more about baking bread at home.

Going With The Grain Bakery is located on Silver Wheel Farm in the northernmost section of Butler County. Sands and her husband, Ben Shaevitz, an avid sailor and physics professor at Slippery Rock University, have been growing organic produce on the farm for about 10 years.

Sands began baking bread when she tried the white bread recipe in “The Joy of Cooking” cookbook she had received as a wedding gift.

“Neither my mother nor my grandmother baked bread. I thought I would try it and found I really enjoyed making bread, and did so over the years for my family,” she said.

She also sometimes took bread to the farmers market where she sold her organic produce and hand-cut flower bouquets.

There is something about the mystery of putting flour, water, yeast and salt together that fascinates Sands. She has learned that if you understand the formula of making bread, the result is very satisfying. It not only is an accomplishment to create great bread, but it also tastes delicious.

Sands has expanded her knowledge of baking bread by studying under noted talented bakers such as Stefan Sender, Trumansburg, New York; Jeffrey Hamelman of King Arthur Flour in Vermont; and Cecile Piot in France.

In December, Going With The Grain Bakery had an open house to show off its new quaint and functional facility. The wood workbenches, a commercial mixer, and towers of open shelving for resting, proofing and cooling loaves of bread, line the perimeter of the bakery. A double-deck Italian hearth oven used for the final step in producing golden brown loaves is the heart of the bakery.

“This oven is one of only four in the United States,” Sands said. She is very pleased with the results from the oven. Family and friends have been recruited to partake of the test loaves before the recipes and techniques are used for bread that Sands sells to her customers.

“This breadmaking class was limited in size because of the size of the workspace as well as to ensure that every student got personal attention”, Sands said.

Students arrived midmorning, and watched as Sands prepared the first loaves that she had begun the day before. They then saw the mixing process and the need for resting the dough. At lunch, they had the opportunity to sample a variety of breads that Sands planned to offer for sale.

Using a formula rather than a recipe was an important part of the class.

“Plan to learn how to do the math,” Sands said. “It isn’t hard. The flour is always 100 percent. Determine how much flour you need to make the number of loaves you want to bake. Then, get your calculator out. The water is about 66 percent, salt is always 2 percent and yeast is 1.5 percent.”

Anything else that you want in the bread is added after that, she said.

She told the class to weigh, not measure by the cup, their ingredients. If they didn’t have scales, she said home bakers really need to get one. She added that it doesn’t have to be fancy.

The location of her bakery does not lend itself to street traffic customers. That did not discourage Sands from investing in this venture.

She is now working on her distribution plan that is patterned after the local CSA (community supported agriculture) model. In 2006, she was part of a group that formed the Northwest Pennsylvania Growers Cooperative, a local CSA that serves many families throughout the area. This group has a winter component and Sands is able to sell eggs and bread through the cooperative.

She wants to be able to have specific pickup locations for her bread in several of the small towns and communities in the area. Currently, a small takeout meal venue in Slippery Rock is serving as the first pickup location. She has several others planned to begin serving customers in the near future.

Her customers order and pay for their bread via her website here.

“I encourage my customers to also be customers of the business where they get their bread,” she said.

The bakery plans to host events throughout the year, including an upcoming seminar called “The Farmer and the Baker: The Winter’s Tale of the Journey of Bread” with farmer Nigel Tudor, who raises organic grains.